There has never been a shortage of death metal in Ireland,but apart from the first Abaddon Incarnate album, the Morphosis demo and much more recently the Lethiferous demo, there hasn't been much in the way of truly evil sounding, dark and suffocating UGDM... Until now!


ZOM bulldozed their way into the local metal scene, by way of the local hardcore punk scene, over the past twelve months or so and with their recently released (and sold out, and re-released, and re-sold out...) demo on Invictus Productions they are making good headway into the European market too, racking up a few tasty support slots along the way.


If you equate death metal with super-dooper hyper gravity blast-beats, OTT technicality and high brow conceptualising then you better look elsewhere. However, if you equate death metal with the queasy breath of an ancient mausoleum, cobwebbed and mildewed coffin stacks and the all embracing, soul engulfing chill of utter morbidity then you may just have found your new favourite cult.


Of course it was my duty to give the ghouls a holler and see what horrors lurk behind the veil. Read on, if you dare.
Welcome maniacs. Lets start with an introduction to the band, who is involved and what other bands you play or have played in.


SABBAC: I have played in several bands prior to ZOM and currently play in several others.


CTHON: Alot of bands with these men.


You came out of nowhere and have really captured peoples' imaginations in the metal underground. What drew you guys to play this type of stuff seeing as you are all better known for your work in the hardcore scene here. What is it about manky death metal that interests you?


SABBAC: I enjoy almost anything with a bleak and oppressive atmosphere irrespective of music genres. Maximum volume is also a plus.


CTHON: I agree with the aforementioned reasons, but I also think it's not uncommon for people to be into both hardcore punk and metal. Structurally, DM and hardcore are very similar, and have a similar underground, DIY ethic. 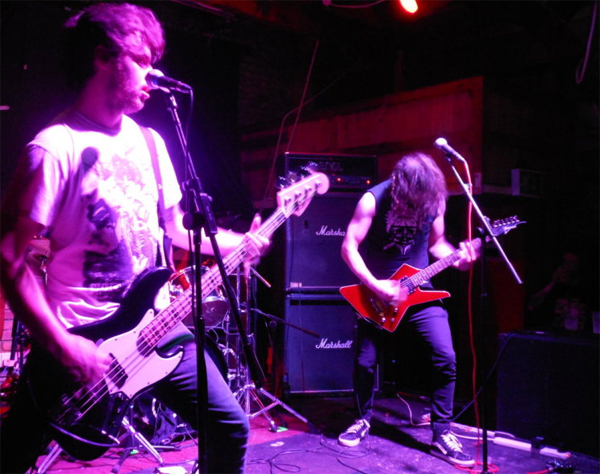 The first press of your demo sold out almost immediately and the second press looks like it is about to go the same way. Why is there a hunger in the underground for this type of death metal? What do you think sets you apart from other DM bands at home and abroad? What do you make of the current crop of death metal bands doing the rounds in Ireland?

SODOMANIAC: I'm not really interested in the current Irish DM bands. The style of DM they play isn't what I would listen to.
SABBAC: Whatever about bands abroad I am completely ignorant of the Irish DM scene. The demo itself is now on it's third repress.
CTHON: The Lethiferous tape is fucking fanastic. Otherwise, there is no Death Metal in this country that appeals to me. It would be remiss not to mention black metal master Fuil na Seanchoille, in regards to Irish metal though. Absolute madness perfected.
The demo was released by the highly respected/respectable label Invictus Productions. This is only the second Irish release on that label in twelve or thirteen years. How did that collaboration come about and how do you see Invictus helping ZOM in your quest for world domination?
SODOMANIAC: Invictus were familiar with Crowd Control and De Novissimis and were interested when they heard we were doing a death metal band.
SABBAC: Invictus liked the music and had opportunities to see us in a live setting...at the time we were unaware that our demo was the second Irish release on the label. Whether that says more about Invictus, ZOM or the Irish metal scene I don't know...nor do I care.
The production on the demo is great; utterly filthy but retaining both power and clarity- apart from the vocals which are a fucking deliciously rabid mess! Tell us about the recording process.


SODOMANIAC: It was all recorded live to preserve the atmosphere and sound that we have at gigs. If something is recorded track by track it loses the feeling of a band playing. It sounds too polished and weak.
It has recently been announced that you will support two of UGDM's leading lights, Sonne Adam and Venenum, in Berlin. Not bad for a band that is barely going a year! What are your expectations for the gig?
SABBAC: I expect to drink a lot of cheap German beer and get little to no sleep.
I have caught you live three or four times at this stage and have been impressed each time. You put horror samples between songs rather than communicate directly with the audience, which is a nice touch. Other than that it's business as usual in terms of presentation. Do you think there are ways you could make the live show more engaging or are you happy to keep it simple and direct?
SODOMANIAC: Simple and direct is better. We don't have anything to say to anyone so the samples are used to keep everything relentless.
SABBAC: There is nothing to say to the audience, we are not trying to convey any sort of message to anyone.
CTHON: Simple and direct is key. We play for ourselves, not to please anyone else. 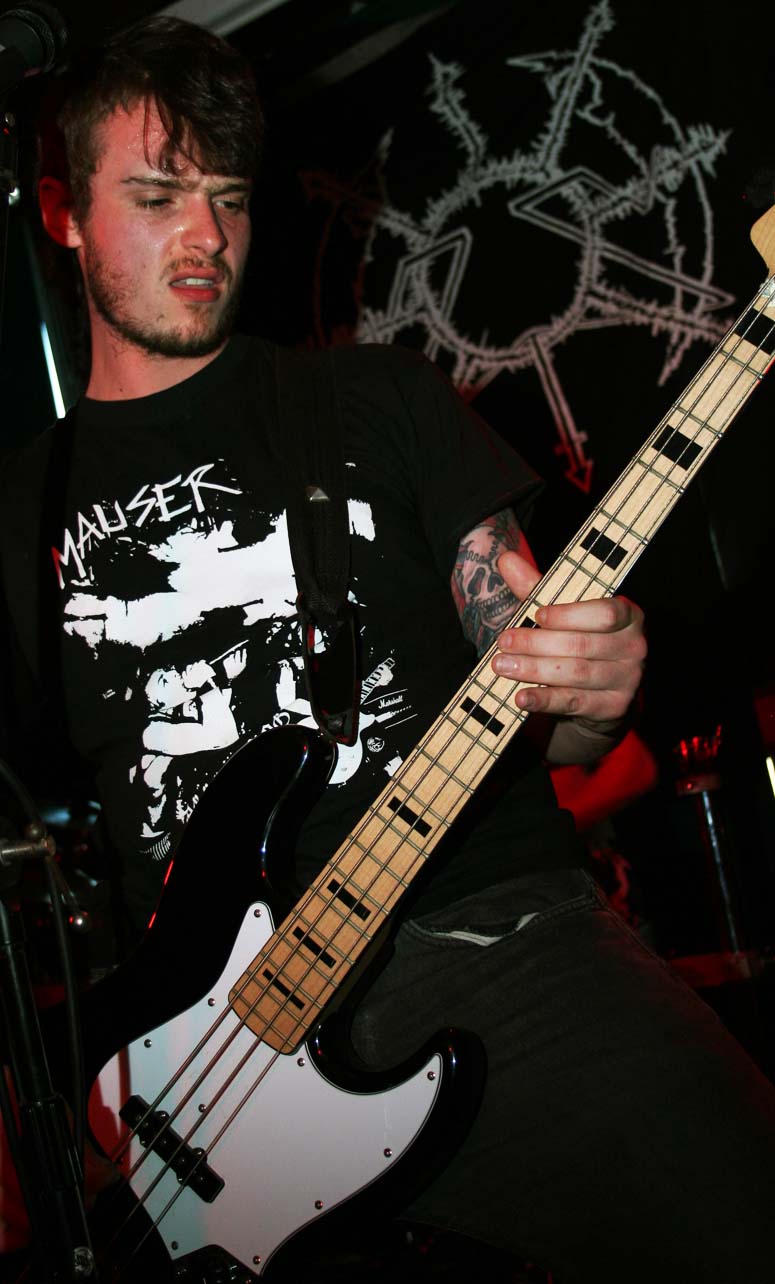 As I mentioned earlier, the vocals are buried under a thick impenetrable shroud of delay and reverb. It is impossible to make out any of the words so what can you tell us about lyrical themes? Is there a band philosophy?
SODOMANIAC: There's no band philosophy. The lyrical themes revolve around evil, the cosmos and demonic destruction.
SABBAC: Band philosophy!? Chaos!?
The name ZOM is taken from a comic book, if I'm not mistaken. This seems a somewhat unusual, dare I say light-hearted, choice for a morbid, bestial death metal band. What is the background of the name and what does it signify to you?
SODOMANIAC: ZOM is a demon created only to destroy, it's an apt name.
SABBAC: The name comes from a being created solely to destroy...as already stated, it's an apt name.
CTHON: I truly fail to see how that's anymore light-hearted than most death metal names/imagery. 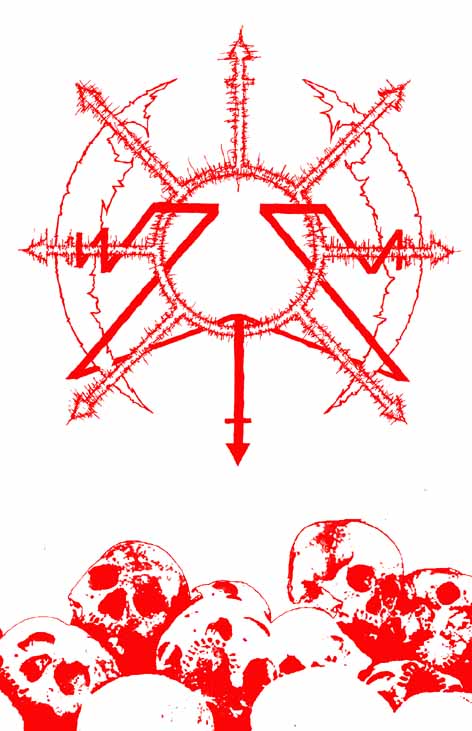 I love the logo. It really has its own character, which I think is important in an ever-growing scene. It makes me think of Queensryche of all bands! What is the idea behind it?
SABBAC: I don't know what the Queensryche logo looks like. I do like symmetry though.
Seeing as you are already off to a great start, what other bands would you like to share a stage with in future?
SABBAC: Negative Plane again, Occultation again, I missed Vomitor when they played here last so those guys as well. Add Necrovation and Repugnant to that list also.
CTHON: Too many. Vomitor, Grave Miasma, Whore, Reveal, Beyond, Fuil na Seanchoille, Morbus Chron, Blasphemy.........
Are there any plans afoot to follow up the demo?
SABBAC: There will be a 7" of new unreleased material at some stage this year. Other than that...play more gigs. Perhaps tour...time will tell.
Cheers for your time. The last words are yours.
SABBAC: .............
CTHON: Only death is real.